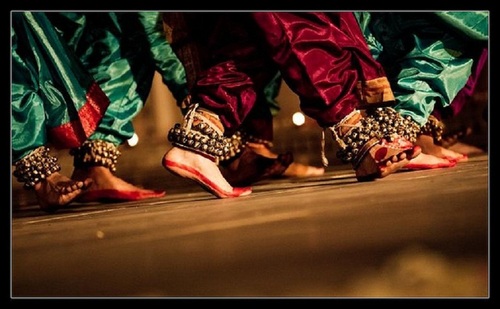 Recap: SPICY gear up for Inayat’s sangeet with an unforgettable performance from their college days. Despite a sour memory between Saloni and Chandni, Paridhi convinces the SPICY to relive that day and makes all the arrangements for their performance.

In the evening, they were all set for an impressive performance. Each of them looked radiant in the cultural attire. While Saloni was dressed in a colourful Chaniya Choli as the Gujarati girl doing Garba, Inayat was dressed in a bright color Salwar Kameez as the Punjabi girl doing Bhangra, Yasmin was to do Kuchipudi so she was wearing a beautiful silk saree in blue color with golden border, Chandni too wore a silk saree but in dark pink color and the main highlight in her attire was the big nose pin made with pearls which was touching her upper lip.

“Oh My My! Look at this Maharashtrian bride gurls! Whistles for you babe!” Paridhi indicated towards Chandni.

All of them looked at Paridhi who was looking too cute in a black sequinned camisole and khaki color hip hop pants and a colorful bandana on her head. She was to shake a leg on freestyle dancing.

“Whoa… look at you girl… you are a Punjabi and you are wearing a Punjabi dress because you have to perform that Bhangra dance.” Paridhi took both her hands in air and showed a bhangra step… “So what’s new for you? Punjabis are born with dance in their DNA and all they have is ‘do this and do that’.” Paridhi again showed 2 steps to Inayat by taking her hands up in the air and then down to the floor and smirked.

“Freestyle is most comfortable.” Inayat said in a complaining tone.

“Comfortable…? Are you kidding me?” Paridhi came back on her. “It is much faster than your Bhangra Babe, and it requires a lot of energy. Show me those neck rolling moves and…”

“Shut up you both” Yasmin interrupted Paridhi’s sentence.

“Inu, why are you always so worried about everything? It is not a new performance… Is it? I am sure everybody is going to love our dance” Chandni tried to cheer her up.

“The audience is my own people and my new family…. And that is freaking me out… My family has allowed me to dance today only because they don’t want to spoil their impression in front of Navdeep’s family” Inayat complained. “I know that my new family is not orthodox like my own family but I am feeling nervous because I am brought up with the “What will society think” attitude. I have developed this habit of worrying tad much before doing anything big. She spoke her heart out.

“Do you want a shot or two… like yesterday? You will feel better” Paridhi giggled.

All of them laughed on this.

Very soon, they were waiting behind the stage to perform. Inayat’s family had built a humongous stage of 30 ft long and 20 ft wide in their plush garden in the backside. Inayat’s youngest uncle, who is only 8 yrs older to her was hosting the event along with his wife. Parmeet, Inayat’s cousin, had already given a sizzling performance with a few cousins. There were more than 200 people in the audience including the bride and groom families and their family friends. Inayat told her concern to Navdeep on Whatsapp and he being a sweet gentleman, cheered her up and told her that he is going to enjoy her very first performance in front of him. Inayat felt much relieved with his replies.

“So now… the last performance of this evening is going to take place.” Uncle announced.

Inayat took deep breaths on his announcement but her friends told her to stay calm while performing.

Uncle introduced the SPICY and all five appeared on the stage. There was a huge applaud that they received because the to-be bride was going to perform now. Inayat looked around for Navdeep from the stage and found him very soon as he was sitting in the first row in the centre area. He winked at her and she blushed on the stage. He smiled and she smiled and everybody hooted on that.

“My desi girl, my desi girl” the song started with Paridhi, who was standing in centre, moving towards the Garba girl Saloni who started with her steps.

“My desi girl, my desi girl” on the second line, Paridhi went to Chandni and she unveiled her Maharashtrian bridal face from the saree’s fall .

“Lehron si chaal pe chaal bicha de” and Inayat appaeared on the stage from front on this line and took the lead position where as Chandni, Saloni and Paridhi took Left, Centre and Right position behind her and continued their moves according to their respective dance forms.

“dekhi lakh lakh pardesi girl, ain’t nobody like my desi girl” Yasmin entered with her kuchipudi moves on this line.

Dekhi lakh lakh ….. and they all danced on this.

On the melody in between the stanza, they all exchanged their dance style. Yasmin did freestyle dancing steps in place of kuchipudi, Saloni did Bhangra in the Garba dress, Inayat did laavni in place of Bhangra, Paridhi did kuchipudi in place of freestyle and Chandni did Garba instead of Laavni… this undoubtedly won the hearts of the audience. They were amused to see the amalgamation of several cultural dances with each other and they gave a big round of applause for the SPICY.

As theirs was the last performance, all the guests joined the dance floor and tapped their feet on DJ. Inayat was feeling shy while dancing with Navdeep. She was scared that somebody from her family would drag her from the crowd and tell her not to dance like shameless people. But absolutely contrary happened. Everybody in her family was delighted to see her dance with Navdeep.

After about an hour, the crowd on the DJ floor started deteriorating and shifted to the dining area. Inayat introduced Navdeep to all her friends.

“You were extra ordinary. Your flawless moves were a treat to eyes” Navdeep told Yasmin and shook hands with her.

“Thank you so much.” Yasmin replied.

“Each of you was really great. I am so happy to see that my would-be wife has got such wonderful friends.” Navdeep said and all of them happily obliged to his sentence.

“Well, we just want you to always take good care of her. She is a blend of innocence and maturity. A very rare combination!” Chandni said and smiled.

“Don’t worry! I will surely keep her happy always. That’s a promise.” Navdeep replied and Inayat affectionately looked at him and her friends hooted.

Inayat got busy with both her families where as the remaining four went to their room to change clothes and came back for dining.

Saloni and Paridhi had made a plan to binge on Vodka Pani Poori. Paridhi kept a small vodka bottle in her purse while coming back from her room. They asked the Paani Poori guy to send a jug of the tangy water on their table with the pooris and the stuffing. Paridhi, secretly took out the Vodka bottle from her purse and mixed it in the jug before anyone could see. Chandni, Paridhi and Saloni had a competition of eating maximum Paani Poori. Chandni was the first one to lose as she could not eat beyond 10 pooris where as Saloni gave a tough fight to Paridhi. Finally both of them ended up pressing their stomach after eating 16 pooris each. Yasmin was the referee and she enjoyed clicking lots of pictures with their funny faces of this competition.

Paridhi went to get desserts for all of them post dinner. Almost when Paridhi reached the table, they all heard the strings of guitar and looked in the direction of the guitar sound.

“Parmeet!” Inayat, who also had joined them said with surprise. “Ohh, he is great on guitar you know” She told all of them with delight.

“Chandni ho tum..” And he looked at Saloni on that line.

“Isn’t that the pick up line from MAIN HOON NA?? Shahrukh did the same for Sushmita Sen in the movie… isn’t it?” Paridhi said and chuckled.

“No, he is not a creep. He is really into you Saloni.” Inayat instantly made her point.

“He took me in a corner when I was talking to Navdeep’s family and asked your name.” She further said and her eyes beamed as if she will be happiest if her friend gets hooked up with her cousin.

“Oh really! Then why is he singing a song for Chandni?” Saloni shot back eating the last bite of Gulab Jamun and looked at Chandni’s face who got amused on her question.

Inayat was baffled on this question and said “Wait, OMG there is a confusion I guess…”

“What confusion?” they all asked together while Parmeet noticed from the DJ floor that none of SPICY is paying attention to him.

“Well, when you guys were sitting here having starters, he took me there in the corner” Inayat pointed in the west direction from their table “and he asked about Saloni but because both of you were sitting adjacent and are wearing almost the same pinkish colour, I could not understand who is he really pointing at and in a hurry to go back, I told him both of your names and apparently he got confused with the names.” Inayat said and knew that any moment now she’ll be scolded by Saloni and Chandni.

And the very next second they heard the guitar at its loudest as Parmeet had reached their table. They all were speechless because of the sudden shock that he gave. He looked at Saloni who was purposefully looking in other direction to ignore him and he sat on his knees in front of her and started singing again “Chand ne kuch kaha, raat ne kuch suna…. Tu bhi sun bekhabar.. Pyaar kar” he touched his chest on left to indicate his feelings to Saloni.

Paridhi grinned and continued the song “Aayi hai Chandni” and she pointed at Chandni on this line and Chandni continued the song with her “tujhse kehne yahi… teri gali tere ghar” and they both laughed. Parmeet was slightly bemused on this and his blank expression made Inayat feel awkward whereas Yasmin covered her mouth to hide her laugh. Finally Saloni mischievously looked him eye to eye and put forward her right hand and said “The name is Saloni” she said and smirked.

Everybody else in the background laughed out loud except Inayat. She was still feeling embarrassed.

“Hi!” He shook hands with her with embarrassment and looked at Inayat who was trying to hide her face behind Yasmin.

“Thanks” Parmeet, who was still embarrassed, replied and stood up to leave.

“What… you are leaving??” Saloni asked “I thought you will sing songs for SALONI now.” She said sarcastically and winked at her friends.

“Well!” Parmeet quickly picked up on this and said “your wish is my command” he smiled and looked straight into her eyes. They exchanged an alluring glance and Parmeet sang 2 more songs for Saloni. Pretty soon, Inayat was called back by her family to be with them. Saloni was invited for a walk by Parmeet to which she obliged. Her friends were certain about their “walk” and hence they decided to go back to their rooms and take some rest.

This site uses Akismet to reduce spam. Learn how your comment data is processed.

A Bit of Both

Tell me your preferred way of reading stories

Wordrazzi – a page for story lovers

Wordrazzi – a page for story lovers